We are pleased to announce that IQ's new drummer will be 37-year-old Andy Edwards.

After the success of last year's critically acclaimed album, ‘Dark Matter', which was voted Album of the Year by, among others, the DPRP in Holland , 'Eclipsed' magazine in Germany and the Classic Rock Society in England , IQ were very saddened by the news that Paul Cook had decided to call it a day after 23 years with the band.

Andy has proved himself to be a more than capable replacement for Cookie, with a wealth of musical experience behind him. Born in Kidderminster, UK, on 21st April 1968, he began playing drums in 1979, encouraged by his father who was also a drummer. Among his other bands, Andy formed an experimental fusion band with Paul Wetton (no relation) called Sinister Footwear and he also recorded an album with Sir Nigel Hawthorne (star of 'Yes, Minister')!

In 1997 Andy was asked to play a local gig with Robert Plant which led to the formation of The Priory of Brion and around 100 gigs all over Europe alongside B B King, Skunk Anansie and Billy Cobham at some of the great music festivals. In 2000 Andy became an endorsee of Tama drums, Meinl cymbals and Aquarian drum heads, and he is a regular clinician, playing alongside such drumming luminaries as Simon Phillips, Steve Smith and Thomas Lang. After touring with Thomas Lang on his UK clinic tour, Andy set up his own drum school in Cradley Heath, West Midlands.

He can be seen playing at Drumfest 2005 on 31 st July and 7 th August, as well as on a week-long UK tour with Kenny Aronoff (drummer with The Rolling Stones, Elton John, The Smashing Pumpkins, Alanis Morissette, Jon Bon Jovi, Bob Dylan and Avril Lavigne) in early August.

In February 2005 Andy was invited by Tama to undertake a clinic tour to promote their new Superstar kit. From this, Tama designed a signature kit for Andy which he will be playing at live dates with IQ later this year in England and mainland Europe.

Andy's first appearance with IQ will be at the Robin 2 in Bilston on 17th September so please come along and support this exciting new phase of the band's career. We'll carry out an interview with Andy soon. 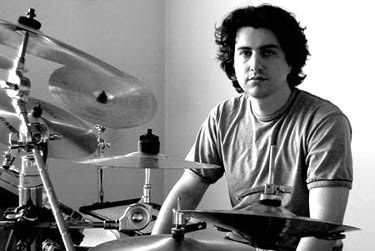